For a number of years now, Meg has been trying to convince me to run the Mnweni marathon (actually 38km) and finally this year things panned out and I managed to get out to the Drakensberg to finally see what she has been talking about. While my race most certainly does not validate a race report or even a blog, I think spending time before, during and after the race with Meg will provide some interesting take-aways for the Run Project athletes on some of the lessons I learnt from her.

With less than a month to go before the Golden Trail Series, Meg and her coach decided that the two weeks leading up to Mnweni would be a good last hard training block, giving her sufficient time to recover ahead of travelling to Europe at the end of May. Not only would she not have any taper for Mnweni but her last hard session would be on the Wednesday before the race so that she would race on tired legs. ‘Luckily’ for me, Meg decided to wait for my arrival at her parents farm in the Natal Midlands before convincing me to join in. The Midlands provides a wonderful training ground and we raced up and down the rolling hills, through the sugar cane plantations and then along the grassy airstrip.

We did an easy run the following day and then the drive into the Drakensberg followed on the Friday. I think what stood out for me these next few days was the calm focus that Meg displayed. Upon arrival we quickly put up the tents (and by quickly I am referring to Meg and her dad), while I lumbered over trying to work out what the heck I was doing. We also wanted to check out the final river crossing before the last 6km of gravel road on the race route. I was told this was the key bit to get right – hmm maybe I should have paid closer attention. 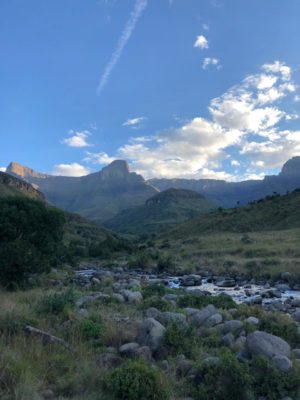 So for those that don’t know the Mnweni marathon is a self-navigation ‘race’ that circumnavigates the Mnweni pass, down the treacherous rockeries descent before winding it’s way back down the valley to the start / finish at the villages cultural centre. The route profile looks like it is up for roughly 20km and then down for 18km with the highest point being around 2,700m and around 1,800m of vertical ascent. The race is organized by ultra-distance running legend Bruce Arnett, and he has managed to create an event that is equally impressive as it is low key. There is no compulsory gear, no water points, no prize giving and it was R180 to run what must be the most impressive pure mountain run in South Africa. Perhaps a big claim but I am going to call it. 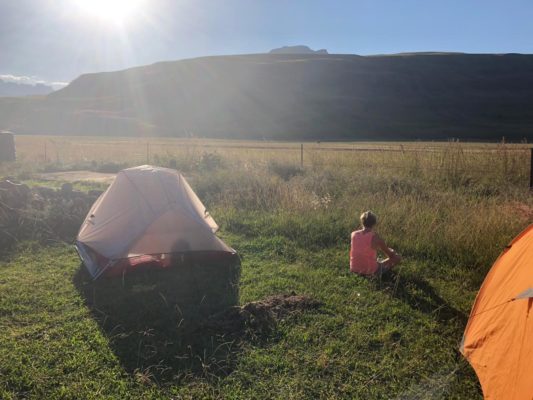 Camping at the cultural center

So back to the race, and I know one of the areas that people always ask Meg about is nutrition (sorry if I am giving away your secrets here Meg). An impressively big dinner of rice, chicken and lots of veggies was followed by a breakfast of rice crackers with peanut butter and banana, a Boom Bar and washed down with a coffee around 90 minutes before the start (4:30am in the morning … eeek).  Even in a low-key fun race, Meg has a process that she follows carefully. Despite not having anywhere to do our daily movement practice we managed to find a small area of concrete that was dry enough to do some crawling, crab walks and hip mobility before venturing off for a short jog with some strides.

The race starts off with a few km’s of gravel road and there were a few guys that went off the front as we settled into a nice comfortable pace as the sun rose above the Berg. As we approached the turn off it gets a little chaotic as everyone thinks they know the fastest way to get onto the single track. Once on the single track the path undulates through beautiful grass lands with high mountains all around. From what I understand there are essentially three different levels of paths, I still have no idea which is the fastest but I was following Meg, yes Meg was navigating. Oh shit! At around the 17km mark we started getting into quite high grass and navigation became even more tricky and we ended up hacking through long grass and big rocks. Not ideal. After 10 minutes or so, a large group of runners passed us and we could see where the trail continued. I looked at Meg thinking she was going to be as grumpy as I was at getting lost and losing so many places, but she was still super calm and smiling despite losing a large chunk of time and now sitting closer to 20th from just outside the top 5 before we got lost. Slowly we picked our way back through the runners before we hit the big pass at around 18km into the race. The pass is 2.5km or so in length and you climb around 900m of vertical gain. Sheesh, out the back of the bus I went! It was truly remarkable watching Meg pick off every runner ahead of her and by the top she was in first place. Speaking to her after the race I mentioned how calm she had been when we got lost, to the point where I had even considered that she maybe had given up on racing, to which she responded no I just had full confidence I would catch every one on the climb. That pass was without doubt the toughest climb I have ever done and I remember Meg’s dad saying to me just before the race started to make sure to look around and take in the beauty. I think he could sense my nerves and wanted to ensure that even during the tough moments you can still enjoy your surroundings, just remember you there because you chose to be. 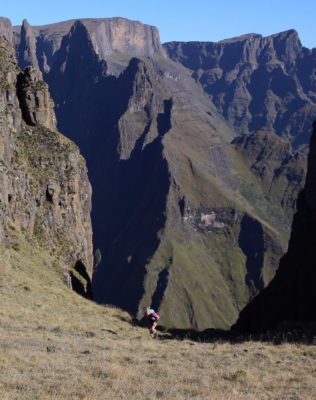 Meg at the top of the Mweni pass

Coming over the top of the mountain you run along a 2km stretch of softish grass which I suspect if you feeling strong you can run pretty quickly. From there you descend down the infamous rockeries pass, where you descend what must be close to 1,800m over 11km or so. The descent was steep, rocky and ran along and over the river that flows all the way back to the start. Close to the bottom of the descent I was joined by one of our awesome clients Craig and it was pretty awesome cruising along cattle paths and dipping in and out of the river for some much-needed cooling down. From the previous day’s recce I knew that coming down into the valley we would need to be on the left side of the river before cutting across about 1km from the gravel road. Unfortunately, I was on the right hand side and despite some pretty impressive bundu bashing couldn’t find where to cross the river and ended up retracing steps to get back onto the wrong path but at least heading in the right direction. I had a proper sense of humor failure but luckily Craig kept his wits about him and helped get us back on track!

The run in to the finish is along a gravel road that is definitely not as flat as one would like at that stage of the race. Meg who had already finished and her dad had driven back to give some words of encouragement as Grumplestiltskin over here managed to creep across the line feeling somewhat frustrated and annoyed. 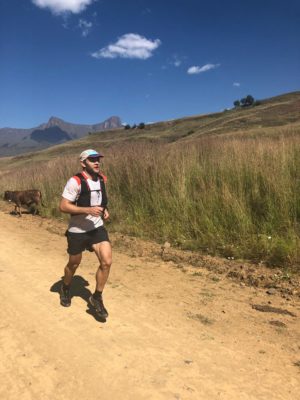 The gravel road … where dreams go to die apparently

The next day I awoke to pretty sore quads but a massively happy and grateful heart. I had also learnt some pretty awesome lessons from Meg (as I so often do). I think these lessons are so applicable to us all that if you don’t take anything else from this then please pay attention now.

To conclude, I was reminded again how awesome racing is. It gives you the opportunity to go out there and put your training and mental fortitude to the test, sometimes it works out and sometimes it doesn’t. When it doesn’t, it’s ok to feel frustrated and disappointed; you have these emotions because you put in lots of time and effort and because you care. More importantly though, I was reminded why I do this awesome sport and that’s because of the amazing places I get to see and the mental and physical challenges that it provides. Thankfully, tomorrow is another opportunity to practice the careful balance between desire and letting go. 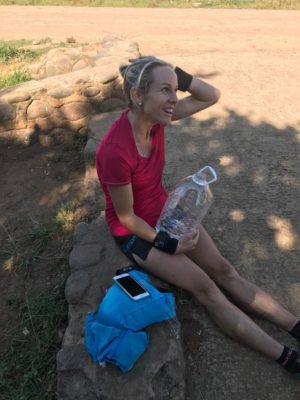